If you follow SIRO on social media, you might have noticed that a lot of our posts share one key message: taking a stand against copper broadband, and rightfully claiming our throne as the Gold Standard of Broadband in Ireland.

The battle against copper is not just being waged in Ireland, but is ongoing all over Europe. First, let us look at the key distinctions that set 100% fibre a cut above copper-based connections.

There are two main technologies used in fibre-optic broadband: Fibre-to-the-cabinet (FTTC) which still uses copper at some points in the network, and Fibre-to-the-home (FTTH) with 100% fibre optic cables.

FTTC connection is slower (up to 100Mbps), less reliable, and more prone to environmental damage over the years. On the other hand, FTTH is the gold standard of broadband internet, offering speeds of up to 1Gbps. Simply put, a 25GB HD movie would take 3 minutes to download on a FTTH 1Gbps connection, but more than 30 minutes on a FTTC 100Mbps connection (source: FTTH Council Europe). FTTH has also been recognised as the only future-proof solution, as fibre-optics cables are resistant to high temperature, humidity, fire, and other extreme environmental factors.

In Ireland, more and more consumers are benefiting from 100% fibre – FTTH is the fastest growing market with an annual growth of 129%, while FTTC connections have declined by 17.6% year-on-year (Comreg data, Q4 2018) 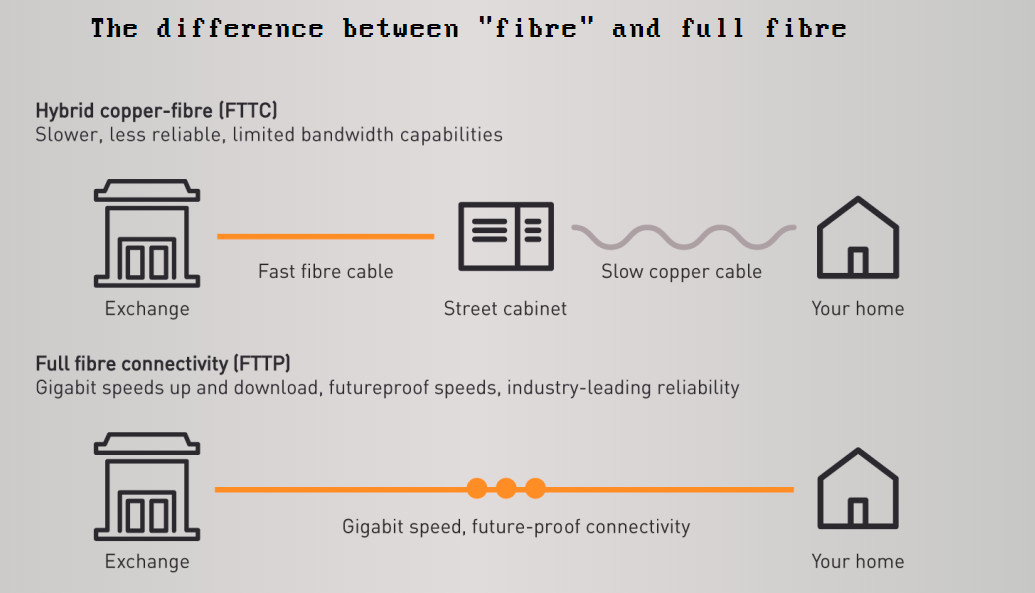 So why the confusion?

Unfortunately, a lot of what is being advertised as ‘fibre broadband’ in Ireland is not 100% fibre. For instance, if you have a ‘fibre’ connection with speeds of up to 100Mbps, it is highly likely that your connection includes copper in the last stretch connecting the exchange cabinet on the street and the router in your house.

Also, another indicator is if you’re told by a provider you need a phone line for your fibre connection. A phone line is not needed for 100% fibre, which runs along the electricity network. It is however required for copper which uses the traditional telephone network.

The confusion caused by misleading advertising is not just limited to Ireland. All over Europe, the battle against ‘fake fibre’ advertising has intensified, with FTTH providers going on the offensive to claim their rightful throne.

What is being done?

In Italy, starting March 2019, broadband providers are required to specify the fibre technology used in their fibre packages by displaying the colour-coded “F”, “FR” or “R” symbol when advertising fibre packages. The green “F” symbol represents 100% FTTH connections, the amber “FR” symbol refers to fibre-to-the-curb (FTTC) or fixed-wireless access (FWA) while the red “R” symbol refers to fibre-to-the-node (FTTN) with copper or wireless interconnections (source: telecompaper.com). The new system is put in place so that ‘customers have a clear idea of the expected performance.’, after a number of leading operators were warned over misleading advertising of their fibre packages.

In the UK, fibre wholesale provider Cityfibre in 2018 launched their Coppersaurus campaign, which aims to ‘unearth the truth behind hybrid copper-based connections being sold as fibre broadband’. Coppersaurus’ central premise is that this kind of advertising is holding consumers back from the connection they deserve, and changes to advertising rules need to be implemented by the UK’s Advertising Standards Authority (ASA).

In Ireland, regulator ASAI is holding public consultations on whether operators are required to specify if their fibre product is 100% fibre, with the outcomes expected to be released in July this year. In the meantime, it is up to the consumers to understand and query their broadband providers, which is no easy task after years of ambiguous advertising.

SIRO, as Ireland’s first 100% FTTH network provider and the rightful winner of the Gold Standard Broadband throne, will continue to keep up the fight against copper broadband, so that our consumers can be as informed as possible in their broadband decision.