This was the night that changed rural Ireland forever. A night that’s going to be seen, and felt, again in towns and villages all over Ireland with the introduction of SIRO and the world’s fastest broadband speeds, see how Ireland’s moment unfolded in our video.

But first, let’s go back to 1947. It was a cold windy evening with patches of snow. The light was fading as a storm was brewing in Oldtown, the small but very excited village in North County Dublin. Something extraordinary was about to happen. January 15th, 1947, was a date and a moment that was soon to be remembered forever. 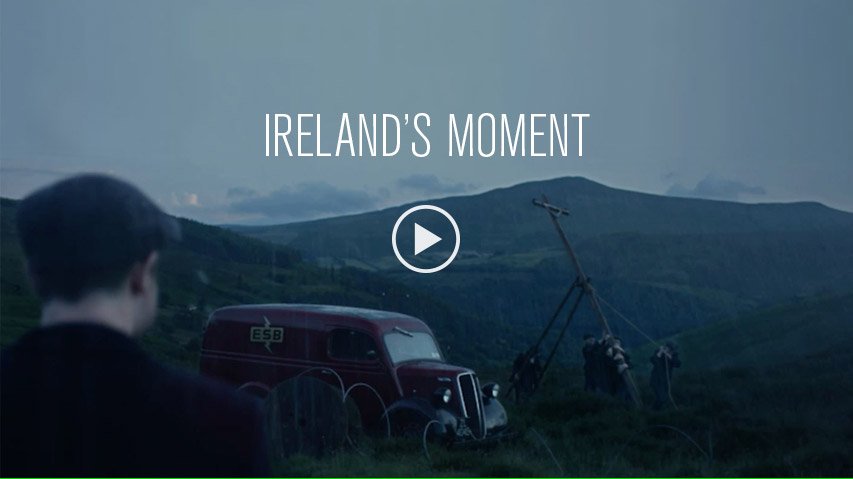 The small village hall of Oldtown was packed with local people of all sorts, young and old. Up on the stage sat a group of leading citizens, the parish priest and senior ESB officials. The occasion for such a gathering? It was all set to be the switching on of electricity for the first time under the new Rural Electrification scheme.

But there was a snag of which the audience were literally kept in the dark about. The severe winter weather had caused a fault in the supply line, and while the speeches commenced an ESB line crew were working frantically in the pitch darkness over a mile away to put things right, to bring the light.

At the back of the stage was a large switch of which all eyes awaited. When flicked it was due to illuminate the entire hall and the village itself. The clock showed eight, the time for the ‘Switch On’. The Engineer-in-Charge, W.F.Roe, began his speech with his own eyes kept on a small gramophone on the table next to him.

The gramophone sat there silently, still awaiting its first jolt of electricity. Anxiety began to rise in the hall, when all of a sudden, the little gramophone turntable started to rotate. The needle dropped onto the record. And the legend has it that a relieved Engineer-in Charge, W.F.Roe, concluded his speech to the flowing sounds of “Cockles and mussels, Alive, Alive – O!”

The hall and village itself lit up and came alive. The electricity had arrived. And now, from one life-changing moment to another: Modern Ireland may have arrived back in 1947 on January 15th but it is the future of Ireland that is now tingling its way through ESB lines up and down rural Ireland. The digital age is about to transform regional Ireland once more.

The age of unlimited possibilities, of unlimited education opportunities, of businesses, schools and hospitals being lit up with the best and fastest technology known to the world.

These life-changing moments are on their way thanks to the moment ESB and Vodafone joined forces. Like the people in Oldtown that night, there are teams of people working hard and fast to bring the fastest broadband speeds of not only Ireland but of the world to villages all over Ireland.

To bring broadband at the speed of light to the people of Ireland. By using today’s ESB nationwide network, SIRO is transforming the old copper connections into 100% fibre optic cables. And with them, comes one of the world’s fastest broadband networks, at the flick of a switch.